A long time ago, in a galaxy that we live in… George Lucas conceived of one of the most popular films of time, the space opera Star Wars. Originally produced as a trilogy, Star Wars become a cultural touchstone for my generation. Many of us know every word, watch the films on repeat, and have bonded with our friends or spouses over the Buddhist-like Force that binds all living things together. Some of us have fantasized about being Princess Leia or Han Solo or Luke Skywalker (or sleeping with them!) and a lot of us have used flashlights as lightsabers, utterly disappointed that this doesn’t really work as we hoped it would. These films are a part of who we are as individuals and as a culture.

And then… George Lucas decided to fuck with them. Since practically the beginning, Lucas has been changing and adding and tweaking them until they are the film equivalent of Michael Jackson’s face: we still see what we loved, but it’s so distorted we can’t help but feel sad.

The biggest changes came in the 1997 theatrical re-release aka “Special Editions” when Lucas felt the need to use CGI to add random animals and city scenes so that it looked fuller and grander and continued with the recent blu rays where Darth Vader unnaturally shouts “Noooooooo!” when killing the Emperor. To which I say, “Nooooooooo!” George Lucas clearly thinks these changes are all hunky doory and totally his right, even though he only directed one of the original trilogy films:

There will only be one [version of the films]. And it won’t be what I would call the “rough cut”, it’ll be the “final cut”. The other one will be some sort of interesting artifact that people will look at and say, “There was an earlier draft of this.” The same thing happens with plays and earlier drafts of books. In essence, films never get finished, they get abandoned. At some point, you’re dragged off the picture kicking and screaming while somebody says, “Okay, it’s done.” That isn’t really the way it should work. Occasionally, [you can] go back and get your cut of the video out there, which I did on both American Graffiti and THX 1138; that’s the place where it will live forever. So what ends up being important in my mind is what the DVD version is going to look like, because that’s what everybody is going to remember. The other versions will disappear. Even the 35 million tapes of Star Wars out there won’t last more than 30 or 40 years. A hundred years from now, the only version of the movie that anyone will remember will be the DVD version [of the Special Edition], and you’ll be able to project it on a 20′ by 40′ screen with perfect quality. I think it’s the director’s prerogative, not the studio’s to go back and reinvent a movie. ~ George Lucas

Except the additions to his first draft just looked like stupid CGI next to awesomeness. And the incongruity this creates is almost as uncomfortable as sitting through Jar Jar Binks scenes in the prequels.

Also, and I know this has been said this before, but… 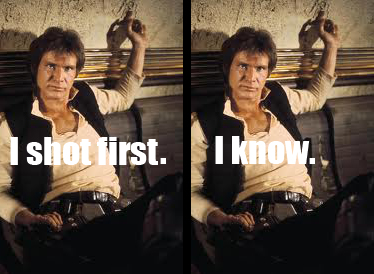 Anyhow, I’m not going to go through all the changes and why they are stupid. Which they are. And which nearly ruined the recent Star Wars marathon The Boy and I had after receiving the blu rays for Christmas. We watched the movies in episodic order, so started with Phantom Menace and ended with Return of the Jedi. After Return of the Sith, we couldn’t wait to star A New Hope to start and for about 15 minutes we were out of the clutches of whiny Anakin Skywalker and in the cocoon of childhood bliss. Then the changes started showing up and my blood pressure kept rising. By the time the second Death Star showed up, it occurred to me that George Lucas has been attempting to remake and fiddle with his creations since the beginning, seeking an unattainable replication of what’s in his head. Which, admittedly, Lucas actually could attain with the prequels, as he wrote and directed them… and THEY SUCKED. The original Star Wars trilogy was the creation of multiple visions and the reality of special effects and budget and a reflection of a moment in time, which is what made them amazing, even without the band dance scene Lucas imagined in Jabba’s palace. Actually, especially without the new Jabba dance number.

I’ve now decided that George Lucas has Star Wars-Dysmorphia Disorder. It is a rare disease. In fact, only one individual is known to have it. However, it has far-reaching impact, as the symptoms affect millions of people. Symptoms include: excessive concern about and preoccupation with a perceived defect; obsessively changing existing work projects; idealization of “perfection”; inability to see works as others see them; developing atypical aesthetic-standards derived from the internal perceptual discrepancy between the person’s ‘actual work’ and the ‘ideal work’.

George Lucas, it seems, doesn’t create films for the enjoyment of others. He creates films to satisfy his own internal vision. And, while as a writer and artist, I understand the urge to share the best version of your imagination, at some point, you have to let go. If a recent interview is any indication, perhaps Lucas is willing to do just that?

“Why would I make any more when everybody yells at you all the time and says what a terrible person you are?” ~ George Lucas

Hmmm. Guess not. George, we don’t want you to make more. We want you to undo what you did to the ones you already made. And maybe seek some professional help.